Hamburg-based K.D. Feddersen GmbH & Co. KG has been a distributor of plastics for renowned international manufacturers for over 60 years. In 1968, Hoechst AG in Frankfurt am Main awarded the exclusive mandate for the distribution of its plastic assortment in Germany to K.D. Feddersen. This collaboration was taken over by the Hoechst successor companies Celanese and LyondellBasell and has been successfully expanded in recent years. Today, it extends over many countries in Europe and Asia.

Back in 1961, Hoechst AG and the Celanese Corporation of America formed a joint venture for the production of POM under the name "Ticona". In 1968, this collaboration then resulted in a distribution agreement for the sale of HOSTAFORM® POM in West Germany by K.D. Feddersen. In 1976, Hoechst AG registered the brand HOSTADUR® for their PBT, which was replaced in the 1990s by the brand name CELANEX®, as it is known today. Hostalen PP was launched in 1978 and added to the distributor's portfolio. 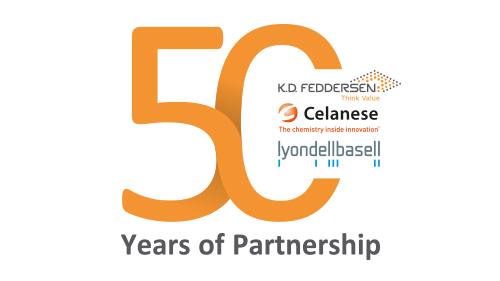 On June 7 and 8 in 2018, Celanese, LyondellBasell and K.D. Feddersen celebrated 50 eventful years of collaboration at an anniversary event in Hamburg. In glorious sunshine, guests from Celanese and LyondellBasell went aboard the historic Alster steamer St. Georg with their distribution partner K.D. Feddersen.

In 1987, Hoechst AG bought Celanese Corp. of America and Ticona went from being a joint venture to a subsidiary of Hoechst AG. In 1989, VECTRA® LCP was launched, followed in 1992 by FORTRON® PPS and Hostacom PP, and then CELSTRAN® LFT in 1995.

Targor GmbH, based in Mainz, was founded in 1997 as a joint venture between Hoechst AG and BASF. This merged the production and development activities for the polypropylene Hostalen PP.

One year later (1998), K.D.F. Distribution (Shanghai) Co., Ltd., was set up in the Waigaoqiao Free Trading Zone in Shanghai, which enabled K.D. Feddersen to enter the Asian market. Another year later, Ticona became a subsidiary of Celanese AG. 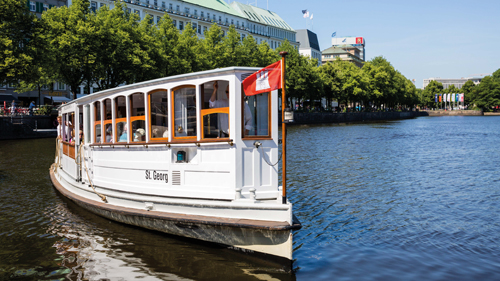 "In 2018, we can now look back on a 50-year partnership with Hoechst AG, Celanese and LyondellBasell. We would like to thank our partners very much, and special thanks also go to our customers."

At the beginning of the new millennium, Basell Polyolefine GmbH was founded as a joint venture between BASF and Shell, which then took over the companies Montell, Targor and Elenac. This led to the Hifax brand becoming part of the portfolio of Basell and K.D. Feddersen. This was followed one year later by Celanese acquiring the distribution of CELSTRAN® LFT.

In 2003, K.D. Feddersen acquired the distribution rights for France for the plastics of Celanese and Basell with the corresponding customer base of French trading company Chimidis SAS and Ravago S.A. This resulted in the formation of K.D. Feddersen Succursale France. In the same year, Basell developed its new soft-touch PP compound Softell, which the distributor then included in its portfolio.

Learn about the milestones from our 50 years of partnership with Celanese and LyondellBasell.

In 2010, Ticona acquired ZENITE® LCP and THERMX® PCT from DuPont. K.D. Feddersen also added both new products to its portfolio.

In 2013, Celanese merged its brand portfolio – since then, Ticona's products have been consistently offered under the umbrella brand "Celanese".

Sales activities were expanded to Southeast Asia following the founding of K.D. Feddersen Singapore Pte. Ltd. and the signing of a distribution agreement with Celanese. Since 2017, K.D. Feddersen has had a mandate to distribute Celanese engineering plastics throughout Europe (except for Switzerland and Spain) as a distributor.